For many months, almost a year I didn’t have any contact with a Cryptid, Spirit or Entity like years previous. It just didn’t happen.

I formerly wrote that it was obvious that I was dealing with a Reptilian who had ulterior motives, bad ones to be exact, back in Utah. I believe this Reptilian blocked contact and held me captive to a certain degree. It has taken me 6 months to shake off this intense interference with my Empathic mind.

Oregon is a unique place for healing because here, Nature’s frequency is so primordial and her tranquility transcends the senses into a blissful reprieve. She reigns supreme here and because of this, my spirit, body, mind, and emotions have started to balance themselves out.

Michael and I took our first hike in one of the state parks close to where we live a few weeks ago. It was on this day that a female Sasquatch named, Warsiah, contacted me.

I was feeling kind of blue so in this particular instance I feel for this reason she decided to reach out to me.

I brought two apples with me and after our first contact, decided to leave one apple in an area that was between two large trunks of a tree that felt like a magical fairy dwelling, hidden from humans.

We went back a week later to see if the apple was gone and it was. The whole apple was gone but I didn’t see any evidence that it was or wasn’t because of Warsiah. To be honest, I’m not sure she took it.

I did tell her no strings attached; just take it as an offering of my friendship and gratitude for her contact. It felt good to feel her energy.

She told me that she is with a clan that is earthbound called, The Breathers. They don’t walk through portals and she said that they have been on this planet since Earths early years before man entered the picture. Her ancestry remembers all the earth’s changes; I guess you could call them, another group along with Loekey’s clan, who are Record Keepers for the earth.

She told me that they intermingle and know the portal jumpers such as Loekey-the portal jumper who contacted me two years ago. The clan can see the portals but they don’t go into them because as Loekey stated, for any human, species or being that is not trained and born into the jumping, it can be dangerous.

Warsiah did say that if necessary they would consider jumping in the portals but only in a catastrophic event.

This doesn’t mean that Warsiah and her clan don’t bring in a variety of unique attributes with them. Their vibration is much higher than ours and it’s easier for them to move from one location to another, faster, almost becoming invisible.  They look as if they are walking in fast forward motion but in truth, they are able to affect the way we see them in our normal time reference. This means she would look like she disappeared, appearing in another location but in reality, she just moves differently in our linear view of time.

She could be standing by a tree and because she is so in tune with Nature, actually they are a part of Nature, she would look like a part of the tree and only if she chose to show herself, would I be able to see her.

She said they watch humans in hopes to meet those who they might make contact with. They keep vigilant tabs on hunters traversing close to their communities, or anyone with weapons or negative intentions. They could be ten feet from someone without them knowing it. They are silent watchers and they prefer to have a more silent footstep. That doesn’t mean they can’t be loud, it just means they are nonconfrontational by nature. But at the same time, they don’t back down from aggressive behavior, especially if it puts them or their loved ones in danger.

Warsiah did say, they did interact with Native Americans who they call Numah, hundreds of years ago but it was not always amicable. I think there was a kind of enmity on both sides but she didn’t go into detail on it. This attitude stands today but I think as with all people they are open to anyone with a good heart.

I got the sense she was a mother, not a young Sasquatch but more so as a woman in her 30’s which for them would easily be 150 years. Obviously, they live much longer than humans because they have very unique DNA. Age just doesn’t happen the same way for them as it does for us and this could possibly be a reason why the military is interested in them.

We intend to go back this week to see if Warsiah took her apple. She’ll get an apple a visit from us so I hope that she enjoys the offering of our friendship and hopefully down the line, she’ll wave at me and I will see her, live in the now. 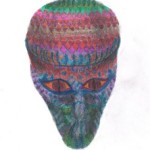 Here is the first of a series of drawings that I am sharing with all of you. Please note that if you wish to use this drawing, ask for my permission first.

This drawing is of a reptilian named Amaden. He came to my attention the first of the year and tried to keep some of the other contacts away from me. I didn’t understand why I hadn’t heard from Loekey or Debryon in quite awhile. This particular visitor decided he wanted all my attention but I wasn’t necessarily cooperating with him. I didn’t know what the problem was but I also wasn’t open to a new contact from anyone. Loekey and Debryon felt like a handful. I have also had another being come to me but I will tell you all more about him in due time.

Understand that I am open to these beings but that does not mean I let them take over my life or allow them to control any aspect of my psyche. This drawing is my interpretation of what Amaden looks like with artistic privilege thrown in. He is actually red through out his body but I put multiple colors in to help give him more definition when copied in black and white.

This will be the first in a series of 7 drawings I have done of each being. Comments are welcome or if anyone has seen something similar, please let me know.