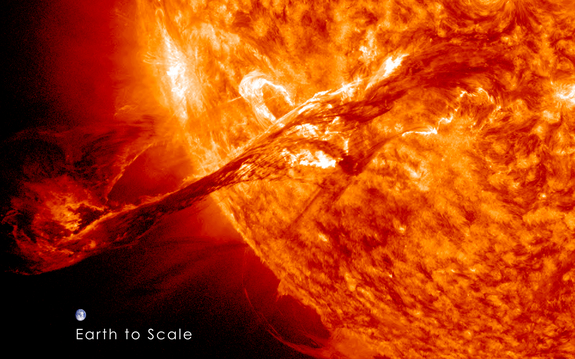 Like many things in life, our star, the Sun, has a cyclical nature. The solar cycle is the change in the sun’s activity including solar flares, sunspots, amount of radiation (energy) leaving the sun and other solar phenomena.

Solar cycles have an average duration of about 11 years, though cycles as short as 9 and as long as 14 years have been observed. They have been observed (by changes in the sun’s appearance and by other changes seen on Earth, such as auroras) for hundreds of years.

A graph of Solar Cycle 24

As you can see, we are just about at the peak of solar cycle 24, and what also can be seen is that we are nowhere near as active as the last peak. This is not entirely unusual, as the graph below shows. No two peaks are exactly the same and some can vary dramatically from one cycle to the other.

Sunspot observations the last 400 years. Note that sunspot numbers before 1745 are approximated.

Though no two cycles are the same, one cycle to the next usually does show a bit of a pattern. For example, a rather active solar peak is usually followed by another active peak. That is why this cycle is causing astronomers a mild surprise.

Fellow AccuWeather Astronomy on Facebookadministrator Mark Combellack said about this solar cycle: “People are hyping anything this solar cycle as it has been amazingly quiet for the most part in the big spot and large flare department.”

What does this cycle being rather quiet mean for the average person? Well, for one, aurora activity may be less active than normal near a solar cycle peak. Also noticeable is that there is a smaller threat for any disruptions in communications and technological devices that depend on satellites. Also, there are some people that believe that because the sun is not that active, the Earth’s atmosphere may be slightly cooler as well.

You can leave your comments, as well as be part of a community where discussions on any astronomy subject, when you join AccuWeather’s Astronomy Facebook Fanpage by clicking here. We are now approaching 26,000 likes. Tell your friends about this site and blog and have them weigh in on some exciting issues. We encourage open discussion and will never criticize any idea, and no negative conversation will be allowed.

The experts on this Facebook page will keep you up to date on any astronomy-related subject. Please feel free to share your opinions.

And please keep the astronomy pictures coming. They have been simply amazing. Ask questions, share comments, share anything.