Like most people I have heard of the mythological creatures called Incubus and Succubus. Outside of documentaries and stories, I didn’t know much about them. They looked to me to be half demon and half fairy. They have the impression of darkness so I see a being that is half-bound to this reality and another realm that feasts upon humanities life force, the living essence of vivacity. Perhaps they are kin to vampires but these beings seem more interested in depleting us just enough to keep us going … yup just like vampires.  One such visitor came calling and he had my name written in the palms of his clammy and distorted fiendish hands.

My story starts in the most unassuming way, a visit to some close friend’s house with Michael on a Saturday. We enjoyed dinner, conversation and dessert. As the evening progressed I felt something strange come in contact with me. It was as if something touched my aura first and then came closer with a more subtle touch, caressing my back. Within an instant it decided to go right through me.  I wasn’t sure what it was but to be honest, I had just drunk my second Margarita so I thought it was me feeling a bit tipsy.

There was something old that I came across in our friend’s home; it might have been a mirror or an unusual antique piece. Usually I keep my wits about me when I am around antiques but this was our friend’s house so I dropped my guard but really, why would I need to worry?

Always play it safe. Do as I say not as I do.

I was feeling so tired, beyond just the normal tired as the night went on. We eventually left later than expected and got home just before midnight. We both fell into what seemed like a deep and welcoming slumber. The next morning I felt like I had been run over by a freight train. It was as if I didn’t sleep at all and it was all I could do to get out of bed. Michael was fine and got up much earlier than me. As I walked into the kitchen I could tell by the look on Michael’s face that I looked like the walking dead.

Let me explain the feelings I was experiencing, the exhaustion I felt was like the plague. And okay, I’ll admit it, I was moody and Michael soon realized that I needed time to wake up so I wouldn’t growl at him. Think of the noises that zombies make when they go after someone and that’s how I sounded. I was in such a high state of fatigue that I almost fell over. My mind was muddy and my normal state of awareness was catatonic. Time stopped and all I could do was feel my heart beating in my chest almost like it was working overtime or trying to catch up to itself. I knew something was wrong but at this point I just thought I was coming down with a cold.

Monday, I didn’t feel like myself but I had a little more energy than the day before. I remember a restless sleep and constantly waking up the night before. I obviously thwarted off something. I can say this now because as the week progressed it was to prove that something was feasting off me.

Tuesday, walking from my bed to the bathroom was an Olympian feat. I was weak and felt like I had been drained of everything inside my body, brains included!

Rocky, one of our two family dogs loves to sleep on the bed especially at night. Two nights of that week, I woke up in the morning to her sleeping on the floor. I mean, you would have to literally physically move her off the bed at times so it was very strange that she moved off on her own.

On Wednesday, I woke up again tired and feeling weak. I was tired of feeling tired and because I was so tired I thought I must be gravely ill. I was thinking of writing a will, that’s how bad I felt.

As an Empath, I didn’t pick up on anything because I was so exhausted but as luck would have it I got a break because Thursday morning changed everything. I woke up at 5:33am in the morning to let the dogs out to use the bathroom. I went back to bed and something really interesting happened. I awoke moments later to the blankets being pulled off me from my left shoulder down to my waist. I was lying on my right side so I had my cat up against my back and Rocky was a little further away from me, snoring.

I was confused at first because I thought it was Rocky or the cat pulling the covers off me by moving around on the bed. Yet, this was a different feeling. It felt as if the air got sucked out of the room like a vacuum. As I opened my eyes and looked up, I saw a shadow figure at the foot of the bed . It was tall, about 7 to 8 feet tall with a really weird body. Think of a large bat with a small head and large wings folded in. The silhouette of this thing gave the impression that it looked vampiric, kind of like something out of an old scary movie.

I said, “What the hell are you doing in my room?”

As soon as it knew I was awake, it flew right into my mirror over my dresser. I sat up in bed and suddenly realized that for a week, this thing had been sucking me dry. Once I knew what it was, I knew that that was half the battle. These dark entities don’t like to be seen and they don’t like to be recognized for what they are. It would be harder for it to come back especially since it was obviously hiding from me. They truly do wallow in their own anonymity.

I wanted to yell, “I saw you sucker!”

That morning, I did a ceremony and blocked it from coming back. I’m still a little weary of my mirror but for the most part I know that this thing can’t come back through the mirror again. Mirrors are after all portals so just remember that there is always another side to a mirror.  At any given time we don’t know what’s watching us from this other side. I know, what a scary thought but Halloween is just around the corner so be vigilant and make sure your reflection is truly your own! 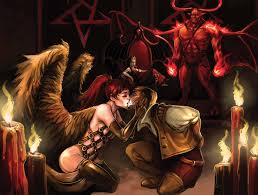