Ed spoke sincerely about his personal experience of cattle mutilations, UFOs, and the Dulce underground base. Ed with his amazing information and high quality photos wowed the crowd two weeks ago. Ed who is in the process of writing a book, a book he declares will be a “tell all” exposing the wider conspiracy surrounding cattle muts, UFOs, and the Dulce base.

During the late 70’s and early 80’s, he and his family lost 40 head of cattle through strange events. There was even evidence of a three pod landing vehicle near the muted cattle. There was the typical rectum coring, and lip and tongue removal and Ed even had a rare horse mutilation. The loss of these animals was valued at about $100,000. An interesting side note: all the mutilated animals were marked with an invisible florescent paint marking system, so at night the craft could target the correct animal for the crime. It turns out all the correct animals were totally raised in the area.

There is always the question why take those odd parts, rather than normal meat flesh. Ed’s answer- first the parts that are taken are from the digestive tract. If the environment was polluted with some agent such as a radioactive element or bio-chemical agent, this problem would appear in the grazing plants. And amounts of these poisons would be detected on the soft membranes of the dead animals.

Ed has speculated that a government agency could have dumped chemical or radiological waste on Indian lands in northern New Mexico. So now the terrorists are tracking their past handy work, watching how long the bad effects would last in this animal population. Note that 23 of Ed’s cattle were killed by a mysterious bacterium (maybe like a Bio-weapon.). It was witnessed that a ship (UFO) hovered over those 23 animals and they were all dead within 24 to 36 hours.

During this same period, the 70’s and 80’s, there was a 40% reduction of births in the Dulce area of deer, elk, cattle and even people and this reduction included numerous miscarriages.

The creditability of the ranchers in the mut area was undermined once the media heard the word UFO. Even though UFOs were sighted around the muts, Ed contributes his own personal nightmare to an unknown government agency. It takes one sick being to first kill your animal, but dropping the ugly caress back on your property is a high degree of intentional harassment.

I know ED in the next year or so will be coming out with both barrels a brazing.

Sleep tight – the truth is on its way. 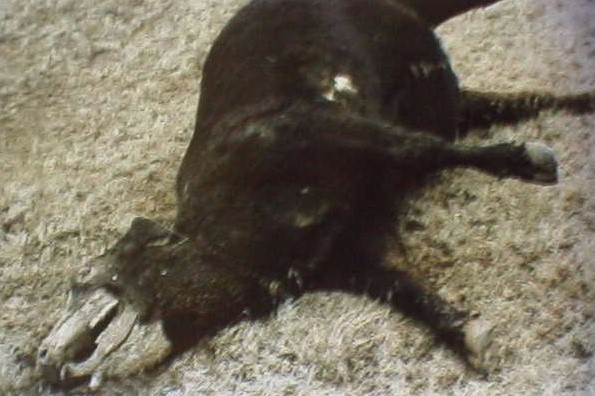