I have written in the past about the Monroe (Marilyn) connection to the world of UFOs. I question did JFK or Bobby K spill the beans to Marilyn and was she going to spill the UFO beans to the world?

We all may find out shortly for Vanity Fair’s Nov. issue is going to start running at least parts of what was in her famous little red diary. Word has it that the Kennedys wanted her to destroy this journal. Was there more than their sexual exploits in this prized little book? My guess is there may have been many secrets in it that would have destroyed the Kennedys. Even though I liked them (the K-boys) for their shot at fighting world political tyranny, they had huge egos, which left them very vulnerable, and their enemies took full advantage of that.

Marilyn, Bobby and Jack together carried secrets that could have changed the world if known to the mainstream public. I am truly convinced of this for they all gave their lives so the Kennedys’ enemies would not be exposed. I believe the UFO picture was part of these secrets and Monroe was about to crack and open the floodgate of truth. Someone very close to Marilyn murdered her.

The Kennedys had made many enemies, but the most powerful ones were the military industrial complex, companies supporting the War machine. These companies had obtained and used UFO technology in exchange for the victimization of US citizens.

I believe the Kennedys at a future time would have alerted the world to this injustice, but Monroe in her fragile mental state was going to do a preemptive strike on the Kennedy’s knowledge and secrets, as jaded lovers do to destroy each other. Monroe paid the ultimate price, her life, and the secrets were held. Bobby and John also fell – these were powerful secrets and the Kennedys needed to be made an example of.

I personally doubt any mention of UFOs will appear in Vanity Fair. It would confuse this strange fairytale of the two gallant knights and the vulnerable, beautiful princess.

Sleep tight, we will all awaken to fight another day. 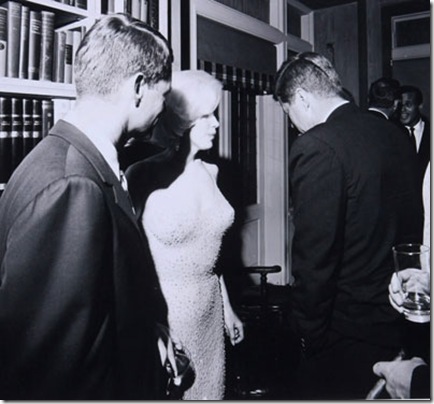