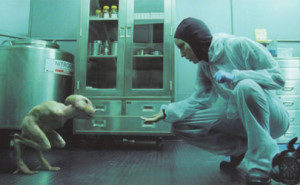 The Island of Dr. Moreau, Brave New World, Frankenstein- movies and books of fiction are being bought to real life by our government through the organization called the NIH (National Institute of Health). Today the federal government announced plans to lift the moratorium on funding experiments that would use human stem cells to create animal embryos that are partly human. So our government is going to be in the business of making alien hybrids. They said the positive side is that these creations would help man understand the inner working of the human body and create human-like parts inside animals for transplants into humans all for the good of humankind. Sounds really good if you had a child who needed a transplant to live.

But there is great danger here, what they are talking about is just a minute away from making monsters who could think like us with the strength of 10 humans but the passion of a fish. Why do I say this? What do I know? What have I seen? Several years ago I helped support a conference in Dulce New Mexico. The conference was on the mysterious underground base, called Dulce underground base on Archuleta Mountain New Mexico on the Jicarilla Apache reservation

The conference was quite wild, with the military showing up and harassing the whole town.

After the conference was over I was approached by several Jicarilla Apaches and they showed me a book of very real photos showing these hybrids – human faces, with gills, scales around their necks and some parts like cowhide. The pictures showed them dead, my only thought was how unhappy it made me feel. Beings that didn’t fit into any one species.

So the NIH’s mission is really in the long run to create new forms of life – monsters in our own image. Aliens and humans have been doing this for years hidden in a mountain (Dulce underground base) out of sight, now coming in plain sight in a city near you.

Sleep tight – I think Donald Trump could support this.