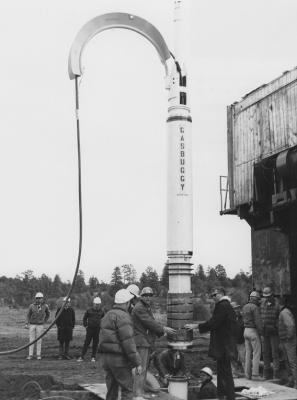 Bennie Armenta clearly remembers the nuclear explosion that shook Farmington to its roots — from the bottom up. He should. He helped move into place the rig that drilled the 4,222-foot hole where the bomb was detonated.
“I didn’t think twice about the radiation then,” said Armenta, who returned to remove the drilling equipment after the explosion. “These days with all that’s going on, I would probably be a bit more worried.”
Armenta was 18 when the federal government performed the underground atomic test approximately 55 miles east of Farmington in Carson National Forest on Dec. 10, 1967. The detonation was part of President Dwight D. Eisenhower’s Atoms for Peace campaign.
Code-named “Gasbuggy,” and part of Operation Ploughshare, the goal of the 29-kiloton nuclear test was to see if a small nuclear blast could stimulate the release of difficult-to-extract natural gas trapped in shale deposits deep below the national forest.
Atoms for Peace and Operation Ploughshare promoted the idea that nuclear explosions could be used for peaceful projects such as mining, canal building and dams.
Twenty-seven nuclear blasts were carried out under the program — all in the Southwest — before it was discontinued because of radiation concerns.
Radiation poisoning is once again in the public eye after the earthquake and tsunami catastrophes in Japan seriously damaged a nuclear power plant there. As the world nervously watches, worrying about how far
radioactive contamination might spread, it brings back an old question. What happened to the radiation near Farmington from 44 years ago?
The answer isn’t simple. However, experts responsible for monitoring the site say that Farmington never saw an increase in radiation levels from Gasbuggy, and that any contamination that occurred is localized to the site. An assertion that may or may not be true, the problem is that once radiation becomes airborne it’s hard to track where it may have gone.
The blast had residents of San Juan County at the time so concerned that Armenta recalls his parents worrying about an underground chain reaction, or Navajo Dam bursting.
“People worried about the bomb breaking the dam loose, or cracking the earth or something,” said Armenta, who is now 61. “I remember people talking about feeling the ground shake in Bloomfield.”
There were also concerns about radiation contaminating everything from groundwater to the natural gas extracted from nearby wells, five of which were less than a mile from the detonation.
A plaque that marks where the 18-inch-diameter shaft was sunk in Carson National Forest warns that excavating in the area is not only forbidden, it could be hazardous.
The worries about radiation contamination were not just public fears, according to declassified records from the Department of Energy. A major concern for government scientists was that any natural gas extracted by atomic means would be too contaminated by radioactive material to be sold commercially.
It was a worry that turned out to be true: DOE records show that the gas was contaminated.
In response, the approximately 300 million cubic feet of gas produced by the well ended up being flared, or burned off.
Flaring, however, is not considered an effective cleanup method. Officials at the DOE Office of Legacy Management, which has monitored the Gasbuggy site since 2007, say that while flaring burns off the gas, it does not eliminate the radioactive particles.
The result could have been “heavy water” — radioactive — in the upper atmosphere, which then could have fallen as rain downwind from the Gasbuggy site, which makes it difficult to know how much contamination was released by the detonation.
The site has never shown signs of dangerous radiation, according to the Environmental Protection Agency.
Yet no one argues that the flaring of the gas must have sent radiation somewhere. The problem is, no one knows where it might have gone, and experts say that by now many of the radioactive isotopes involved would have broken down and become part of New Mexico’s general radiation levels.
Documents from the EPA, which monitored the site from 1972 to 2007, show that along with annual testing of ground water at and nearby the site, soil samples were taken in 1978, 1986, 2000 and 2002. Officials say that the site always has remained well below danger levels.
One of the reasons, according to documents, is that an extensive remediation process that included shipping contaminated soil to disposal sites and back-filling the initial shaft with contaminated material managed to reduce any surface contamination at the site.
The final surface remediation, which resulted in the removal of 5,562 cubic yards of contaminated soil, was completed in 2004.
“I’ve been out there since when they were doing some testing,” Armenta said. “They had that hole opened up and a bunch of guys in white suits were messing around.”
Legacy Management Site Manager Jalena Dayvault said that the level of testing at the site both before and after the blast was extensive.
“We have taken a very conservative approach,” Dayvault said. “We wanted to monitor everything and so far we have found nothing. Because of that we have reduced the level of testing to every five years.”
Legacy Management has begun testing the natural gas from the nearby wells that are still functioning, Dayvault said.
“There is still gas production near there,” she said. “But so far there has been no contamination found at the nearest of the wells.”