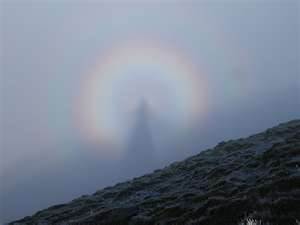 There is a mountain in Scotland called Ben MacDhui, which is the second largest mountain in Scotland. It is rarely visited because of its difficult terrain with its towering peak and flat summit. It can however be accessed by a 20-mile long arduous and quite dangerous pass area. It has been a mountain with strange tales of ghostly music, inexplicable laughter and voices and other strange phenomena.
The scariest of these phenomena are the reports of apparitions of colossal size with crunching footsteps, which have driven many climbers straight down the mountain never to return. In the 1920’s one of the first creditable witnesses was Norman Collie, a professor of organic chemistry at the University of London. He reported he was on the mountain and a thick mist started to surround him, and suddenly behind him came crunching footsteps following him. As the eerie sounds continued he was seized in terror and bolted down the mountain and didn’t turn back for over 5 miles. He decided he would never go back up the mountain again.

Next a renowned mountaineer, Dr. Kellas was climbing the same mountain with his brother when they spied a big grey man walking through a pass to the top of the mountain. The big grey man was about 10 feet tall. He disappeared and reappeared throughout the doctor’s trip. Finally the doctor and his brother got so freaked out they abandoned the climb and returned down the mountain in terror.
And there were many other stories over the years. There are many theories on what caused the sightings, such as optical illusions, strange energy in the mountain rocks, electromagnetic forces near the top of the mountain. But the theory I personally like is the portal theory. This was a place where an opening exists into another world. And maybe there is a Bigfoot-type creature that is there to protect the opening.

Why do I say this–because Bigfoot can be 10 ft tall, he can also project fear into man if he wants to, they can easily be mistaken for a large grey man from a distance and Bigfoot are interdimensional.

Sleep tight, the world of the paranormal happens everywhere and always.
MWiz