Visit us on Dimensional Walking – a paranormal journey – YouTube 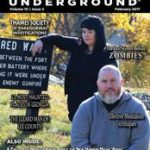 Just a quick not to all of you paranormal fans. Check out, Paranormal Underground magazine. My article, “The Collective Reality with Night Terrors and Scary Movies,” is in the February, 2017 issue as the guest editorial piece.

You will get the best in articles, information and insight besides finding out where the action is happening outside your neck of the woods.

Paranormal Underground is a digital magazine but they also print out hard-copies. So check out their website at:

I highly recommend subscribing to this fabulous magazine!

Maybe God does not want you to know the secrets of the “spirit world.” Have you considered that? Then you would know more than souls do! So what is a “soul”? They are what prove that God is real! Of course, you may have heard them mentioned in hymns or scripture readings. But neither you nor anyone else knows anything more about souls today.

Two thousand years ago, Greek philosophers like Plato and Socrates discussed and wrote about souls. Early church fathers taught about them. But the emerging Roman Catholic Church threatened teachers to stop them from “such heresy.” Maybe that is why you never read or hear about souls except in hymns and scriptures.
Today, however, you have read and heard about strange happenings called near-death experiences. Some people who survive sudden cardiac arrest claim they watched doctors resuscitate them from the ceiling above. Some even tell about “visiting Heaven.” Moreover, a few of you have had a feeling of dread that your loved one or close friend had a bad accident or even died. Once you learned the facts, you found that the accident or death occurred at the exact day and time you had that weird feeling. Also, specially trained psychologists now detect and treat emotionally traumatic memories in recently born infants. These are from negative experiences the fetus had in the womb. But how could such memories be formed with immature brains?
These three happenings—and many others—are called “behavioral phenomena.” “Phenomena” are defined as “facts or situations that are observed to exist or happen, especially ones whose cause or explanation is in question.” Sound familiar? You probably have read or heard about many such “phenomena” or, as they are now called, “behavioral phenomena.”
Maybe you also remember that scientists still can’t explain our “waking” consciousness”. It obviously exists but apparently not from our brains! Actually, the psychologists who work with infants’ traumatic memories from before birth now know that such memories are neither “conscious” nor from their brains. The best report of this is found in psychoanalyst David Chamberlain’s influential book Windows to the Womb: Revealing the Conscious Baby From Conception to Birth. Researchers in this field have applied different terms to the womb source of these memories, including “fetal consciousness” and “transcendent source of consciousness” (TSC). The psychologist using TSC has a revealing disclaimer as a footnote in her book: “The term ‘soul’ is not used because it is not sufficiently academic.” Chamberlain explained why the term “soul” or “soul consciousness” seems a better choice.
Another discipline supports this. Critical care and resuscitation specialist Sam Parnia’s 2013 book Erasing Death: The Science That is Rewriting the Boundaries Between Life and Death is a ground-breaking progress report on improving the outcome of cardiopulmonary resuscitation (CPR) for cardiac arrest and strengthening the chances of patient recovery.

Parnia’s book claims, “If the mind—consciousness (or soul)—can continue to exist and function when the brain does not function after death, then it raises the possibility that it may be a separate undiscovered scientific entity that is not produced through the brain’s usual electrical and chemical processes. Since 2000, some researchers, including me, have started to focus more on the cognitive experiences that people have during a cardiac arrest and hence death. This is no longer ambiguous and vague. Today it is becoming much more difficult to define or understand death without considering a person’s consciousness or soul.”
So Parnia asks, “Does consciousness, the self, or the soul become lost, in the true sense of the word, immediately after death? The answer,” he says, “ that is coming out more and more seems to suggest that it doesn’t. Consciousness or the soul, while down and thus invisible to the outside world, is not lost forever as an entity.”
God-given souls join each of us in the womb, unite with our “waking consciousness,” and survive our mortal death to return to Heaven. They subsequently may reincarnate with a new human body, as was a common belief in Jesus’ time—before the Roman Catholic Church suppressed its teaching.

My most recent book is “The Real You Is Immortal: Whether You Like It or Not!” WFP/Indiana

Date: July 2010 Time: 03:00 a.m.
The main witness was on his way home from Chester West Virginia with his girlfriend. They
were on RT 68 between East Liverpool Ohio and Midland Pennsylvania along the Ohio River.
The time was around 3 am and a thing that looked like a black angel flew in front of his truck, it
was about 6 ft tall and was so close that they both ducked. Whatever it was it came from the
river side of the road. The witness wanted to report the event to the police but his girlfriend
refused, pointing out that “they will think we are crazy”.
HC addendum
Source: Phantoms and Monsters May 22 2011 Type: E
17.
Location. Near Brisbane, Queensland, Australia
Date: July 2010 Time: evening
The witness was visiting his friend at her summer house and as her parents went out
shopping and she napped in the bedroom he was playing ‘Play station’ when all of a sudden he
caught movement out of the cornerof his eyes through the big window, right next to the
television. He was stunned to see a pale-white, medium size creature that ran by into the
bushes. He then decided to go outside to check. The first few minutes, there was nothing, by

‘nothing’ he meant no ambient noise like birds whistling, etc. He ‘regrettably’ moved towards
the bushes, where he began hearing a sound, like a growling of some sort.
He was a good ten feet away from the bushes when he saw the most hideous thing jump
out of the bushes. A pale, bald, naked man, with pitch-black eyes stood right in front of him. He
was in shock and couldn’t move at all. The creature had pointy ears and teeth. It did not have a
nose, but two holes in the center of its face (similar to Voldemort from Harry Potter). It was
growling, almost like a dog. Then it disappeared into thin air. Then the witness thinks that he
passed out, he next heard the sound of his friend’s parent’scar. He got up and went inside. He
didn’t tell them what had occurred.