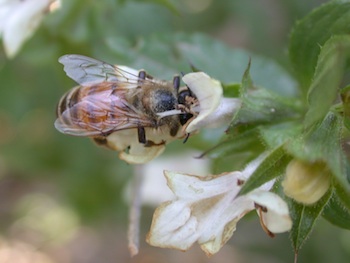 By Katherine Harmon is an associate editor for Scientific American Via Accuweather.com

Honeybee colonies have been mysteriously dying off all over the globe, leaving scientists scratching their heads-and important crops languishing in the fields unpollinated. Viruses, mites, pesticides and poor food choices have been fingered as potential culprits. And three new studies in the past week are taking aim at one of the most common types of agricultural insecticides.
Farmers worldwide have been using one popular neonicotinoid, imidacloprid, for about a decade to keep harmful insects off their cotton, corn, grains, potatoes, rice, vegetables and other crops. Like other neonicotinoids it targets the nervous system of insects, resulting in paralysis and death. Because honeybees (Apis mellifera) are insects, too, biologists have long suspected neonicotinoids as a possible force in colony collapse disorder.
Although most residue levels have not been found to kill bees on contact, the chemicals could conceivably do harm later on in these important pollinators-or their offspring-that ingest it either through nectar from sprayed crops or through the corn syrup that beekeepers feed to their bees; that syrup is made from insecticide-treated corn.
Researchers have now found that repeated low-dose exposures are perfectly capable of gradually killing of whole hives of bees. In fact, 94 percent of hives whose bees had been fed the pesticide died off entirely within less than six months, according to a new paper that will be in the June issue of Bulletin of Insectology.
Starting in the summer of 2010, Chensheng Lu, an associate professor of environmental exposure biology at Harvard School of Public Health, along with members of the Worcester County Beekeepers Association in Massachusetts, monitored 20 brand new hives. The hives were kept in four separate clusters that were at least 12 kilometers apart, ensuring the bees from each cluster would not mingle. In each cluster of hives, four hives were fed standard, commercial high-fructose corn syrup (which many honeybee keepers would feed their bees) laced with trace amounts of imidacloprid (comparable to concentrations that have been found in the environment) and one control hive was given only the high-fructose corn syrup.

Honeybee image courtesy of Wikimedia Commons/Gideon Pisanty
The feeding began July 1, and the imidacloprid dosing was stopped in the experimental hives at the end of September (after which all bees were fed a standard high-fructose corn syrup and granular sucrose diet). By mid-December, all of the hives had gone into over-wintering mode and were still alive. But some of the pesticide-fed hives were showing signs of weakening; scatterings of dead bees were found on the snow in front of these faltering hives.
The first experimental hive was found to be empty of bees, signaling collapse, on December 31, 2010. And by Feb. 24, 2011, all but one imidacloprid-treated hive had any surviving bees. “Dead hives were remarkably empty except for stores of food and some pollen left on the frames,” the study authors noted. One of the control hives had fallen, the researchers noted, but it showed signs of having been infected with dysentery. The researchers did not find signs that any of the dead hives had been overtaken by the Nosema virus or Varroa mites, both of which have been suspected in the past of contributing to colony collapse disorder. This finding suggests that in some cases, insecticide alone might be able to bring down a hive.
Two other teams of researchers, based in France and the U.K., respectively, also found that hives fed with the insecticide failed to prosper. The French group reported that honeybees exposed to a similar neonicotinoid insecticide (thiamethoxam) had a harder time finding their way back to the hive, weakening the colony, possibly making it more prone to collapse. And the U.K. group fed trace amounts of the insecticide to bumble bees, whose populations have also been contracting. They found that it made the bumble bees less able to produce queens that could start new hives. Both of their papers were published in the March 30 issue of Science.
Commenting in the New York Times, an ecotoxicologist from Bayer CropScience, a company that makes imidacloprid, took issue with the French study, arguing that the bees were fed an unrealistically high does of insecticide. The authors of the paper noted, however, that it was a distinctly sublethal dose. The authors of the Harvard-based paper tried a variety of doses (ranging from 20 micrograms of insecticide per kilogram of corn syrup to 200 micrograms), all of which led to colony deaths. “Our experiment included pesticide amounts below what is normally present in the environment,” Lu said in a prepared statement. “It apparently doesn’t take much of the pesticide to affect the bees.”
Lu and his colleagues are unsure why the insecticide might have resulted in such a delayed colony death, especially as many of the bees that would have fed on the pesticide-infused syrup would have already been replaced by a new generation by the wintertime. They hypothesize that the low levels of the toxin might have affected larval growth and led to weaker adults.
More work will need to be done to determine how these small doses of insecticide might be killing off bee colonies-and how it might be contributing to other observed plagues, such as mites and viruses, and even parasites that seem to put honeybees into a zombie-like state, as a report earlier this year indicated.
But work will need to be swift. At least a third of U.S. honeybee colonies have died out in the past six years. “The significance of bees to agricultural cannot be understated,” Lu said. They pollinate about one third of U.S. crop species, including almonds, apples, grapes, soybeans, cotton, and others, the failure of which could lead not only to food shortages, but also to large economic hits for farmers-and consumers.