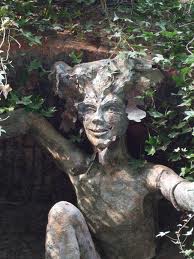 If you follow my Weblog you know I do Vortex photography and some of the photos I get are of Faeries. You can see some of these photos by doing a search on this site by putting in “Vortex” in the upper right corner search bar.
Faeries come in many shapes and forms. Some of the beings would not be considered by some to be faeries, such as dwarfs and goblins. The Faerie Realm covers a great deal of ground of the small and tiny beings that inhabit nature.

I have chosen to discuss in a series of blogs the bad guys in the Faerie world.
First the Spriggans, they are quite small but have the ability to inflate themselves into large and dangerous creatures. The Spriggans are an infamous group of villains, thieves that will steal your money, your house and even your children. They can cause whirlwinds that can destroy crops. If they kidnap your child they will leave one of their ugly ones behind.

A general comment here on Faeries, they tend to be spiteful and mischievous, so dealing with them should be done with great caution. Respect is the key when approaching group members or their property; they will defend both to the death. And remember they have abilities that humans do not, and they will use them to their advantage.

Next the Bogles are generally evil-natured Goblins although they seem to do harm to liars and murderers. The RedCap is one of the most evil Goblins, living in old towers. He enjoys killing men to re-dye his cap in human blood. So there are many more types of faeries, many good and many bad. But the truth is they are real, so very real, you must only perceive them.

Sleep Tight, Reality is not what it seems, the strangeness is waiting for you.