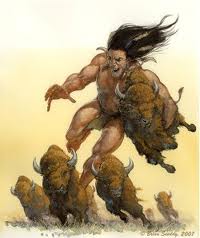 See my previous posting from Part 1 on 05/19/12. So to continue, an Italian scholar Antonio Pigafetta was traveling with Ferdinand Magellan on his expedition to the Indies. Antonio kept a complete journal of those travels, and in the journal there were many references to giants. One story was about a sighting of a huge giant who was naked, dancing, and throwing beach sand on his head. The giant was so big that Magellan’s tallest crewmember only came mid-way between the giant’s waist and his shoulder.

Another great Spanish explorer named Vespucci Amerigo (the guy the Americas were named after) wrote in his journals about encounters with giants on the island of Curacao.
They followed huge footprints up a trail and then they came across a small village, where they found 5 women, whom the Spaniards planned to kidnap, but soon giant men showed up. The Spaniards were able to get some food and drink from the giants, but then the Spaniards started getting nervous as they looked at the huge strength and stature of the giants and thought it best to get back to their ships and leave. Vespucci named the island–Curacao the Isle of Giants.

Next there was “Buffalo Bill Cody” an American soldier, hunter, and showman. At one meeting with the Pawnee Indians, they presented a large thighbone of a giant.
The Native Americans explained to Wild Bill that the bones were from an ancient race of giants that were three times the height of a normal man, and these giants could run down a buffalo, wrestle it to the ground and eat it raw.

In the late 20’s a nine-foot tall red haired mummy was discovered in a cave near Lovelock, Nevada. Other artifacts were found in this same cave years later, and rumor has it these artifacts are stored in a room at the Humboldt County Museum in Winnemucca, Nevada.

Sleep tight; maybe you will meet a giant in your dreams or while exploring the back roads of America.