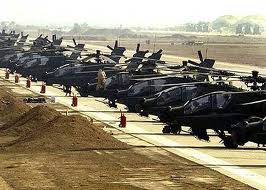 For many years, the civilian intelligence communities (as well as part of the public sector) seemed to have been aware of CIA’s connection and presence at Arizona’s Marana facility (a.k.a., Pinal Air Park or EVERGREEN AIR facility).

In the early 1990s, rumors began to circulate that the Marana facility (7 miles northwest of Marana) had been utilized by what was allegedly known then as the Multi-jurisdictional Task Force.

A friend of mine who, in 1991, was a commercial pilot for the American Airlines told me back then that one weekday (during his day off from work) he rented a Cessna plane and decided to fly over the Marana complex, just for curiosity.

He told me that while he was flying over the facility, he distinctly heard from his radio transmission the code word “MAJIC” several times. I thought that was quite interesting.

The rumors had it then that the facility was a training area for special helicopters as well as for other Black Ops programs. A school for governmental limo drivers was even said to have been there.

A few years ago I drove straight to this Pinal Air Park and was told to turn around and leave immediately at the Guard Shack. Even today this facility is guarded by a private security force. (I am not certain if it is Wackenhut or not).

Since around February of 2010, another strange rumor about this “suspicious” facility has been circulating. (at least in the wild imaginings of some conspiracy theorists…LOL !!)

By the way anyone can clearly see this facility on Google Earth….just go to Marana in Arizona and look for Pinal Air Park, about 7 miles northwest of Marana.

Anyway, for what it’s worth,

HERE IS MY FINAL ASSESSMENT ON PINAL AIR PARK:

It is quite possible that, at one time, Pinal Air Park may have been used as a logistics airport for some CIA-involved operations.

Pinal Air Park claims that today it is nothing but a “boneyard” for civilian commercial aircraft, utilizing the dry desert climate to prevent any form of corrosion and says that it is one of the largest aircraft graveyards in the U.S.

It is difficult for me to believe that this is a secret “chemtrail” facility as wildly claimed by some conspiracy theorists.