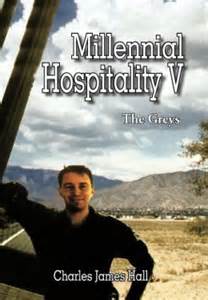 Our group New Mexico UFO/ Paranormal Forum was proud to present the Halls. Their story was about Charles, a retired Air Force personnel, and his encounters with the Tall Whites, Grays and the Norwegians. It all started back over 50 years ago when Charles as a young man joined the Air Force and was stationed as a weather observer. He was posted deep into Area 51/53 north of Nellis AFB. It was a lonely post miles from civilization. Charles seemed to enjoy the serenity as he watched the clouds, but there were more than just clouds in the middle of the desert. There were strange but wonderful beings that would come and observe Charles as he worked.

But there was a Black Ops agenda for Charles being there. The agenda was for Charles to be the human guinea pig and allow the alien beings to get close to Charles, probably to feel his energy and emotions. Charles did find out a couple of somewhat alarming things. First, he was on his own out there in the desert, whatever happened. They probably would not rescue him if an issue arose. And apparently there were as many as 40 others manning the post before him, who evidently didn’t get good results. Charles was never told the fate of his predecessors.

Charles is a very religious Roman Catholic and said without his faith he wouldn’t have made this strange journey out in the desert. Charles was challenged to just keep his mind grounded. The interesting thing about being close to aliens is that their energy is so different from humans and can disrupt the human flow of mind and spirit; this makes most feel quite crazy and paranoid. But Charles held it together with the help of his faith.

Charles James Hall survived his many encounters with the three groups of very different alien beings. Charles went on to write 5 books about his journey, and he and his wife Marie have traveled the world telling his story. One thing I learned from my encounter with Charles and Marie is that maybe, just maybe, alien beings are closer on a emotional level to us crazy humans than I once thought.

Sleep Tight, these non-humans are among us and always have been among us.