As stated in a previous posting (09/29/07) there are probably 125 to 200 alien being types on this wonderful earth. They come in all sizes and shapes- sort of like the bar scene in the movie “Star Warsâ€. So here we go again into a strange bar scene, 2007 version – planet Earth.

Reptiloids – Average height, weight, body temp, pulse, blood pressure and life expectancy as compared to humans. Female life expectancy is 23 years and in some cases less. They are cold-blooded, flourish in warm climates or artificial warm environments, such as caves. Some are friendly to humans but most are on the mean side. They mostly look like a reptile with some human features (e.g., two legs and two arms, bipedal).

Insectoids- two types, Masters and Servants. Compared to man, they are shorter, lighter, have a higher body temperature, pulse rate and life expectancy (130 to 150 years). Masters have insect and human combined features (bipedal). The Servants, who serve the Masters, look like large four-legged stand-up bugs. They both have amazing visual and auditory ability.

Deviants – Scary guys (here comes the legend of the demon race), very dangerous and primitive guys. They would rather rip your head off than say good morning. They look like the meanest and ugliest monster you have seen on any sci-fi show.

Meta-terrestrial beings are from our possible future, time travelers, a mix of say humans and Zeta-Reticulaes. They are tall with long necks, have a peaceful look about them, and peaceful in the way they react with humans (unknown to this author).

Mooks are funny-clothed, small bipedal creatures with long beak-type noses, three digits on each hand and foot, and they are always eating. They are neutral to man.

Bigfoot â€“the missing link? We (humans) may be a hybrid between a Bigfoot type and another Nordic type being. BF are extremely intelligent and passive. They are wonderful beings and want just to save the earth from its destruction. They have been seen on alien ships and also seen doing guard functions around bases, so they do coordinate with other alien groups. Some humans have developed close relationships with BF and their families.

This has been a brief description of some of the more common groups hanging out around us. Of course if all they were doing is “hanging out”- there would not be issues or problems with their presence.

New being types are observed yearly- of course we are depending on the perception of the observer and their cultural slant to make a good description. 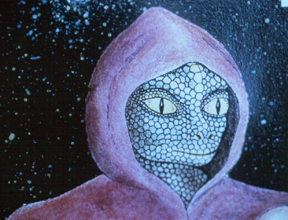