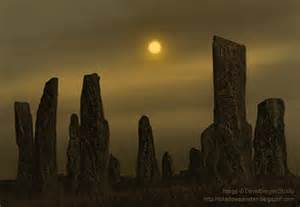 The term ley or ley lines was coined in the 1920’s by Alfred Watkins when he was doing research on sacred ancient sites and noticed that they were connected by these straight paths that people had worn walking on them for hundreds of years. There are ley lines that connect major sites around the world with straight latitudinal lines. These lines are connected to the theory of intense positive and negative energy. The positive energy produces good stuff and negative not so good. If evil rituals, like human sacrifice, occur on a ley it is said to be blackened and now a place where more evil can occur. The signature of the evil leaves its mark and attracts other evil. To the layperson it would be difficult to tell the difference between good and bad ley, so caution must always to be used near ley lines.

Ley can affect people differently; people born at a certain place and time may be affected differently when visiting ley areas thousands of miles away. It’s about the cosmic signature that is imprinted on a person at birth; that resonance determines how compatible the person is with the ley he/she is encountering. A close friend of mine lived in Cairo, Egypt for 6 months. Cairo is an area of intense ley lines crossing the city, probably having a lot to do with the pyramids. My close friend who visited there for those 6 months had some amazing things happen to her personally such as her hair grew rapidly 4 to 6 inches in a very short time, her skin glowed, she lost weight, her metabolism was like a racehorse and more importantly she was protected from all the strangeness that can be Egypt.

I will talk in part 2 about the UFO connection and the ley lines.

Sleep Tight, reality is truly not what it seems, but embrace the strangeness with caution and protection.
MWiz.