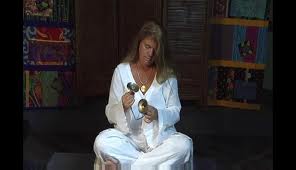 I say yes, she is the real McCoy. I met Marcia at Gary’s September Dowser’s meeting in Las Lunas, New Mexico. Marcia had an aneurysm about four years ago and was in a coma for eight days. She said during those eight days she was on an adventure into a spiritual light world. This place is where there were new colors never seen on earth and no words to describe them. This place is where she nearly wanted to stay, and permanently leave the earth plane. But they (the beings) in this strange world told her that she still had a mission to complete on the earth plane. So she bargained with this group of beings, and she told them she wanted to be healed in order to go back and complete this mission, which they basically never told her what it was.

In her unconscious eight days she saw ocean waves of light surrounding her body, bathing her body with the love of the universe. When she finally woke out of the coma, her brain scans were perfect with no sign of the aneurysm.

So as time went on Marcia realized she was now a connecter to the Source. She would be in the presence of people and could put herself in a meditated state. She was able to project with love the power and the beauty of Source Energy. They had taught her to tap into the quantum field that surrounds all of us; this field just waits for us to vibrate at the correct higher frequency. Marcia said many people on earth are approaching this higher consciousness that will activate them into the new reality, a reality full of love and peace.

And here is the key thing, we have to get out of our heads and into our hearts. For this key will open our door to a new world. We are the co-creators of all that is around us. Marcia said this world is but an illusion. Marcia meditates in silence to create the environment to interact with this amazing source.

I will tell you when I left the meeting I was in total peace; it took 24 hours for our present toxic environment to shake me back to this world’s illusion. But it was a great 24 hours, thanks to Marcia.

Sleep Tight, The illusion will be over shortly, and a new reality will start.