As this is being posted a group of paranormal researchers and UFO enthusiasts will be making their way to the mysterious little town of Dulce, New Mexico. They will participate in a first of its kind of conference-in a forum-type setting about the rumored Underground Base and all of the strange events over the many years of its alleged existence. Dulce is located in the heart of the Jicarilla Apache Nation, on the Colorado and New Mexico border.

I have personally never been there, but some of my friends have and their experiences are varied but what they have in common is strange and somewhat scary. Briefly some experienced floating orbs, strange structures with doors to nowhere, and dormitories with no visual evidence of even being occupied by people. Also they witnessed some sort of generator buildings with huge fans and ducts going into the ground. And still others have been telepathically communicated with to leave town and never ever return. Others have come face to face with human/reptile beings with unhappy outlooks on life. It is even rumored the only motel in town is connected by an elevator/underground tunnel to the base. I once sent a person through the town to check it out. Although he saw nothing, he sent me a picture of the Best Western Motel and unbeknownst to him, in the right hand corner there is an amazing UFO in the distance.

For more conspiratory information on the Dulce Base the following two sites are excellent to catch up on the fun.
http://www.crowdedskies.com/dulce_papers.htm or http://www.thewatcherfiles.com/dulce_book.html

Here are a few thoughts from an article posted on the conference host, Norio Hayakawa’s website.

â€œAlthough throughout the years the residents of Dulce seem to have taken all these strange rumors about their community with a grain of salt, Hayakawa says that he would like to restore some sense of normalcy to Dulce. This is the reason he will host Dulce’s first public conference on the topic. Hayakawa is intent on dispelling rumors, once and for all, that there are such bases in or near Dulce. Will the townsfolk of Dulce speak up at the conference? Will there be some new revelations about Dulce? “It will be fascinating,” said Hayakawa.â€

The conference, open to the public, will be held on Sunday, March 29, 2009 10:00am at the Best Western Jicarilla Inn in Dulce. This adventures emotional content could go from fun to very profoundly frightening. Stay tuned: there will be a full report next Saturday 04/04/09, if I make it back. 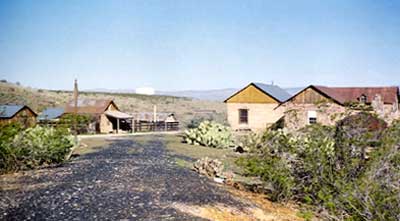 The sleepy Town of Dulce.