accuweather.com
Jan 1, 2012; 12:07 AM ET
NASA’s twin spacecraft to study the Moon while in lunar orbit will both enter orbit soon.
Named Gravity Recovery And Interior Laboratory (GRAIL), GRAIL-A was put in orbit at 4:21 p.m. EST Dec. 31, and GRAIL-B will settle into orbit at 5:05 p.m. EST on New Year’s Day.
NASA’s Apollo crews took about three days to travel to the Moon. In contrast, these spacecraft were launched from Cape Canaveral Air Force Station on Sept. 10, 2011, the GRAIL spacecraft are taking about 30 times that long to cover the more than 2.5 million miles to get there.
Over the following weeks, the GRAIL team will execute a series of burns to each spacecraft to reduce their orbital period from 11.5 hours down to just under two hours. At the start of the science phase in March 2012, the two GRAILs will be in a near-polar, near-circular orbit with an altitude of about 34 miles.
When science collection begins, the spacecraft will transmit radio signals to figure out exactly the distance between them as they orbit the Moon. As they fly over areas of greater and lesser gravity, caused both by visible features such as mountains and craters and by masses hidden beneath the lunar surface, they will move slightly toward and away from each other. An instrument aboard each spacecraft will measure the changes in their relative velocity very precisely, and scientists will translate this information into a high-resolution map of the Moon’s gravitational field. The data will allow mission scientists to understand what goes on below the surface of the Moon. This information will increase our knowledge of how Earth and its rocky neighbors in the inner solar system developed into the diverse worlds we see today.
An artist’s rendition of the twin GRAIL spacecraft in Moon’s orbit

Please join in or begin a conversation by clicking here. You can leave your comments, as well as be part of a community where discussions on any astronomy subject taking place. We are now over 2,250 likes. Tell your friends about this site and blog, and have them weigh in on some exciting issues. We encourage open discussion and will never criticize any idea, and no negative conversation will be allowed.
My experts will keep you up-to-date on any astronomy related subject. Please feel free to share your opinions! 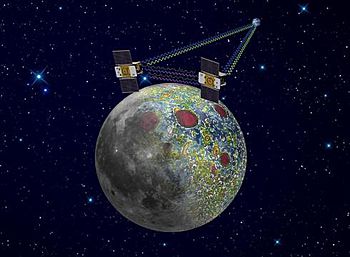