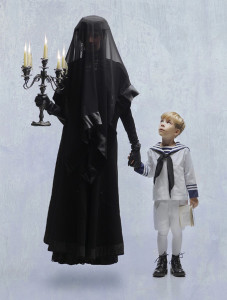 Many years ago I had a MIB (Men in Black) and a Women in Black experience, which to say the least was very strange, but enlightening. Once I realized what was going on and was able to keep calm, I quickly confused them with my own bizarre questions, which they were not able to answer,and they quickly left the area.
Well let’s talk about the female version of those MIBs.

They seem to have a long rich history going back centuries. In the very distant past they (WIBs)seemed to like the cover of night as they terrorized witnesses of paranormal subjects such as pixies, fairies, goblins,people that studied alchemy, etc. In the recent past they would be seen coming out of an old shiny black Cadillac, or in the 17thcentury,in a black carriage pulled by black red-eyed stallions. In the 1920’s one appeared in a Charlie Chaplin movie; she was wearing a black hat, long black coat and covered her face, and believe it or not, she was holding something to her head that looked a lot like a cell phone (this was from an article by Nick Redfern).

During the 60’s in West Virginia the Mothman legend brought out the WIBs trying to stop the reporting of the numerous sightings of the famous winged creature. One of the WIB reportedly told the witness that she was John Keel’s secretary. John, as you may know, wrote the book Mothman Prophecies. Turns out he never had a secretary.

The WIBs also have approached homes telling occupants that they are social workers concerned about the children in the home, police officers,and other professionals that could sneak into a person’s home to possibly do something sinister to family members as they(WIBs) try to suppress UFO/paranormal memories. This approach is very similar to that of the “black-eyed children” (search for my recent blog on that subject -upper right corner).

If you have more interest in WIBs, watch for Nick Redfern’s new book on the subject.

Sleep tight, WIBs, if they approach be fearless, for fear is where their power over you lies.
MWiz