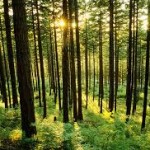 The next morning, I woke up wide eyed and bushy tailed. Considering I’m not a morning person, (just ask Michael) I was in unusually good spirits. I went in and took a shower smiling because I knew Loekey wouldn’t try to communicate with me in the shower anymore. I have no idea why I knew this, but I did.

I came back into the bedroom after my shower, sat down and started putting my make-up on. I kind of zoned out a bit and without any forethought or conscious effort on my part, I abruptly blurted out to Michael that I saw Loekey in our bedroom during the night. It was kind of weird because I felt like a volcano, expelling my visitation out into the world. Let’s go beyond that, I literally blasted the information upward and out before I had a chance to know what I was really saying. Michael just looked at me for a minute with an amused look on his face, and then sat down on the bed. I kind of laughed because I felt like a 6 year old that couldn’t keep a secret. Needless to say, Michael wanted to hear all the details and as I was sitting in front of him, putting on my make-up, I began to tell him what Loekey had told me…

Loekey’s World
Loekey said his tribe had lived in the Oregon State for hundreds of years. It happened to be a place they liked but more then that he said that many of the Sasquatch people lived through out mountainous regions, claiming them as their home. He said various tribes live through the Rocky Mountains besides the rock dwellers in states like New Mexico, Arizona and parts of Texas.

To keep the story straight, yes they consider themselves like humans but not in the sense as we see ourselves. They have similar mannerisms and customs as we do but the similarities stop there. They are a different sub species from ancient ancestors that are time travelers. He said that they communicate with various tribes through telepathy and by means of a jump room ability within groups of various trees…their favorite being pine trees. He said the trees afforded them a way to transport themselves from location to location with ease. I’m not sure about forests overseas but I can only assume they can portal jump just about anywhere.

Loekey’s group is part of a scouting clan that understands the way of the forests. They know when there are significant problems that come up such as forest fires, deforestation and they try to help any and all animals within those areas that are hurt or have nowhere to go. They are Earth Keepers, meaning that they have a deep connection to the earth and her frequency. They can hear her heart beat, they understand her rhythmic pulse and they know the areas that are the most painful for her. Any place where there has been a tragic, man-made accident affecting the earth and her waters; they go there to access the damage. They are the watchers of Earth’s history, pretty much being her time clock and witness. They try to keep an essential balance between their duties and obligations to Mother Earth while eluding man and his curiosity to hunt them. Sometimes chance encounters happen, creating unintentional and dangerous encounters with humans. As far as Loekey knows, there have been no deaths on either end from such chance encounters.

In regards to Loekey’s tribe, he said they are only 8 to 9 feet in height, sometimes a little taller but for the most part they are robust with the ability to travel by foot, hundreds of miles in a day. His skull is long on top, almost making it look like he has a cone head with a lot of fur like hair. They are skilled hunters, enjoying fishing and he said they like a lot of the same food we eat. He especially said he liked oranges. (I thought this was interesting.)

Loekey stated that the really tall and large Sasquatch were very dangerous, even for them. This particular group are anywhere from 12 feet in height to 17 feet or more. He said that when various tribes travel through out areas where these large Sasquatch dwell, they have to do so in careful and methodical ways. Males have to travel in small groups surrounding their families in order to divert any attention away from these giants. Loekey said the large Sasquatch can be cannibalistic in nature; it just depends on the circumstances. Fortunately for us, these large giants prefer to stay away from humans. In a very bizarre paradox, the giants are revered by many of the Sasquatch tribes because they are considered sentient elders by ancient clandestine laws known only to the Sasquatch. This basically means that the giants carry a lot of Earth’s archaic history in their DNA.

Loekey told me that he sensed my presence when my family and I drove through a rainforest during last year’s Christmas vacation in Oregon. He waited for an introduction that wouldn’t scare me so when I happened to see the Bigfoot image on YouTube; I unknowingly made the first gesture of friendship.

Believe it or not there’s more…