NASA’s next Mars rover will land at the foot of a layered mountain inside the planet’s Gale Crater.
The car-sized Mars Science Laboratory, or Curiosity, is scheduled to launch late this year and land in August 2012. The target crater spans 96 miles in diameter and holds a mountain rising higher from the crater floor than Mount Rainier rises above Seattle. Gale is about the combined area of Connecticut and Rhode Island. Layering in the mound suggests it is the surviving remnant of an extensive sequence of deposits. The crater is named for Australian astronomer Walter F. Gale.
“Mars is firmly in our sights,” said NASA Administrator Charles Bolden. “Curiosity not only will return a wealth of important science data, but it will serve as a precursor mission for human exploration to the Red Planet.”
During a prime mission lasting one Martian year (nearly two Earth years), researchers will use the rover’s tools to study whether the landing region had favorable environmental conditions for supporting microbial life and for preserving clues about whether life ever existed.
“Scientists identified Gale as their top choice to pursue the ambitious goals of this new rover mission,” said Jim Green, director for the Planetary Science Division at NASA Headquarters in Washington. “The site offers a visually dramatic landscape and also great potential for significant science findings.”
Curiosity is about twice as long and more than five times as heavy as any previous Mars rover. Its 10 science instruments include two for ingesting and analyzing samples of powdered rock that the rover’s robotic arm collects. A radioisotope power source will provide heat and electric power to the rover. A rocket-powered sky crane suspending Curiosity on tethers will lower the rover directly to the Martian surface.
The portion of the crater where Curiosity will land has an alluvial fan likely formed by water-carried sediments. The layers at the base of the mountain contain clays and sulfates, both known to form in water.

Please join the AccuWeather.com Astronomy fanpage by clicking here. You can leave your comments there, as well, and be part of a community where discussions on this or any other astronomy subject take place. We are now over well over 1,600 likes on Facebook and recently the growth has been rapid. With your help we will get to 2,000 soon. Tell your friends about this site and blog and weigh in on some exciting issues. We encourage open discussion and will never criticize any idea, and no negative conversation will be allowed.
blogs Home > 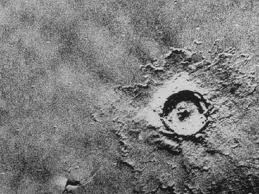