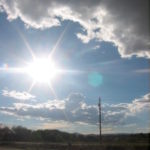 Part 1.
A while back I talked to my oldest sister about our upbringing growing up in a conservative household. We both realized that there were some things about our childhood that we had never talked about. I guess this is common in many families for various reasons. Scary things can be hidden and placed on the back burner of life especially when youth and independence is pushing itself past the doors of authority. We wanted to leave Albuquerque as soon as we could but it never occurred to us until our later years to look at why this was so.

Our recollections of the Catholic elementary school we went to with our middle sister are basically the same; lost time, blocked memories, fear and a constant anxiety on a daily basis. My memories of the halls of this particular school seem to fade into an elongated tunnel that usually gets darker each step I take. It appears that my memory confuses the underground tunnels of the local military base with the school because at this time I was bused out on a weekly basis. The memories blur together sometimes and pulling them apart is like pulling apart superglue.

We have realized that the Catholic school we went to hid unmentionables from our parents and one such memory comes to mind. I can remember being in the principal’s office with my mother. My mother scolded the principal for lacking in the ability to hire good teachers because as a little first grader I was not doing well, basically I couldn’t read. The principal told my mother that I was retarded (yes, really) and that it wasn’t their fault I couldn’t read. Little did my mother know that much more was going on and there was a reason why I couldn’t read.
As my mother talked in a very high pitched tone, the principal was looking me square in the eyes, cold as ever reminding me to keep my mouth shut. After all, the very parent they threatened me they would hurt if I talked, was my mother. Eyes cast down, I knew I was just like the trapped animals they hurt to remind me to be quiet. Even though my parents felt they kept us safe, they didn’t understand how underhanded and malevolent the principal was and the people who took me out of school at various times to the underground bases. It seems to be part of the program to keep the surface of perceived expectations infallible for parents so that the modus operandi can continue without fail.

Memories of blue busses and mountain entrances along with the anxious chatter of several children talking all at once, has stayed with me all these years. Sometimes I wonder if it’s all implanted memory or if it really did happen. As an adult, I have found some areas of Albuquerque have a dark and haunted energy to them. My memories have guided me to these areas and thanks to my visual recollections; they corroborate specific locations to profound and surprising detail. Maybe I am the one more haunted than the locations, how can it be any different.

Physical implications with living in a young experiencers bubble can come in all manifestations. There’s was nothing more embarrassing than the moments I wet my pants because my body would react out of fear from some unseen memory or monster. It could be at any time or place, on weekends or family outings. Instinctively, I remembered the locations of interactions or abductions and my body just reacted from those memories. I felt ashamed and remember to this day, at certain places, kids around me, laughing at me and my sisters walking me to the bathroom. I grew up baffled as to why certain locations would scare me so but I realized that Albuquerque was only culpable because I lived there .

As a child, if I woke up with strange looking pink fluid coming out of my private parts and on my underwear, I would throw them away, too embarrassed to even show my mom. As an adult the few times I have awoke with the pink fluid coming out of me, I instinctively hid it from anyone, again too embarrassed to say anything. To this day, I still don’t talk about it much.

The déjà-vu replays itself over and over again whenever I go back home to visit. Looking at each memory, it’s no wonder as an adult I replay the emotions over and over again. I have come to the conclusion that emotions heal at a different pace than that of the mind or body. Perhaps one day, when they are all on the same page I’ll go back home and the moment will be just that, a moment in time with nothing connected to it.