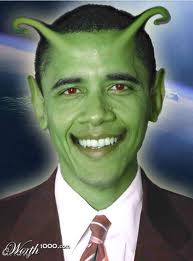 Well what if, this sounds like something the Republicans would like to exploit, and I am sure it has crossed their minds. But I won’t get politically silly here. I have seen some interesting pictures (photo-shopped) making Mr. O look like a quite handsome Martian type, with pointy light green ears.

So let’s talk here about what the president would do policy-wise with us humans and his alien friends. Here is a list of the alien policies and why it would be a good idea.
1. Obama would set up a worldwide commission to help integrate the Hybrids into human society. Sad thing is that Hybrids have been among us for at least 50 + years. This idea is well overdue. But it will be easy to sell this because of the long time the Hybrids have been here. And they haven’t eaten us yet.
2. He would propose to set up Jump Rooms in various large cities to instantly transport a person to another city or Mars, Venus, and maybe another portal to another dimension. This is being done today and there is at least a dozen of sites around the world that have been serving as instant transporters to faraway places.
3. He would reassure the public that he (Alien/ Hybrid) has not destroyed the world in his Presidency; of course about 50 % of the US public would protest greatly that statement.
4. Now that global warming past the tipping point a year ago. Obama would tell the earthlings starting immediately Alien Technology would be used to slow down, stop and reverse its effects. In return humans would have to reduce their consummation by 50% (western countries) and a couple could only have one child worldwide until the population drops below 1 billion people.
5. Since for thousands of years, the aliens have been raping the planet of its resources (similar to Mankind) a fund would be set up to develop and help the 50 poorest countries in the world. Everyone that has been abducted in the past would be compensated in a fair matter and mental health treatment would be provided.

Well, Obama is probably not an Alien (ET) but any good president should demand the above 6 items for the good of the World. And trust me when I tell you, the presidents of the last 75 years or so have known about the Alien/ Hybrid existence.

Sleep Tight – Justice and truth will conquer all.
MWiz.