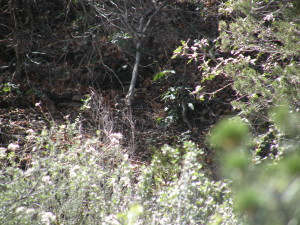 Sasquatch Speaks and Strangeness Strikes
20 Comments April 30, 2013 Nick Redfern It’s fair to say that I’m not just a regular recipient of strange tales of a supernatural nature. Just occasionally, I’m the recipient of tales that easily exceed what could be termed strange. I’m talking about those distinctly rogue cases that veer into territories where a researcher is forced to take one of two views: (a) what the witness reported simply did not happen; or (b) some of the mysterious things that people such as me chase down are not just weird. They’re beyond weird. The following case is a perfect example of the latter.

It came to me a few years ago from a couple named Donnie and Lynne, a thirty-something pair originally from Tulsa, who were living on the fringes of Oklahoma City when I interviewed them. March 8, 2007, Donnie told me, marked the couple’s second wedding anniversary. And, as keen outdoors-people with a love of nature, they decided to avoid the typical vacation resorts that would normally spring to mind, and instead decided to spend nine days deep in the heart of the grand Ouachita National Forest. The decision was one they would later come to bitterly regret.

Covering the western section of Arkansas and parts of eastern Oklahoma, the Ouachita National Forest is the oldest National Forest in the southern United States. It encompasses almost two million acres, including most of the scenic Ouachita Mountains – Ouachita being the French spelling of the Indian word Washita, which means “good hunting grounds.”

Around 5.00 p.m. one day before their vacation ended, the pair was walking along the aforementioned Ouachita National Recreation Trail, when Donnie developed a distinct and foreboding feeling that we all experience now and again: namely, that of being watched. He was not wrong.

As the pair strolled along the trail hand-in-hand, to the left of them and at a distance of no more than twenty feet a huge, hairy creature came crashing through the trees. Although up until this point, they had no more exposure to the world of cryptozoology than most people, they instantly knew what they were looking at: a Bigfoot.

Donnie told me that the creature was truly immense: at least eight and a half feet tall, “obviously male,” and with very bulky arms and legs. It had a cone-shaped head, a “massive chest,” and was covered in “dark brown hair that had a lot of white in it [and] which made us think he was really old.” Too shocked to move – “I fell to my knees,” Lynne told me – the couple merely stared, as the huge creature did likewise in their direction.

But then something truly strange occurred: in somewhat hesitant tones, Donnie said they continued to look on in both awe and fear, when suddenly their minds were filled with a soothing female voice that uttered the words: “Do not be afraid. You will not be harmed. Do not come closer.”

It was as if “we were thinking the words, but listening to them, too, if that makes any sense,” Donnie said, as he grappled to explain the sensation of hearing the disembodied, telepathic-like voice. And, of course, the fact that a soft female voice emanated from a beast that looked like it could tear apart a small car, only made the whole situation even stranger. But even weirder things were to come.

Trying to compose himself, at least as best he could, as his wife still sat shaking on her knees and clinging to his right leg for support, Donnie’s first thought was to take a photograph of the beast. As he made a move to open his back-pack and pull out his digital-camera, two ever so slightly stern words reverberated around his head: “Do not.” For a moment, he tried to ignore the words and continued to frantically dig for his camera. “No, do not. No, do not,” the voice repeated, as the face of the creature changed from one of a blank stare to a distinctly malevolent frown.

“Do not,” the voice continued, still in eerily calm-and-collected female tones. Perhaps wisely, Donnie finally did as he was told, and sank to his knees and held Lynne tightly. At that moment, the mighty Bigfoot edged closer and to a point where he was about ten feet from the by now terrified couple. “The smell was terrible: like a dead animal,” Lynne recalled.

As it loomed over them, they heard one final message: “You will not be hurt and you need not fear. Go. One more time I shall see you.” Needless to say, Donnie and Lynne needed no encouragement and, struggling to stand on their trembling legs, headed off at high speed down the trail, constantly looking over their shoulders until the creature was lost from sight as the pathway took a turn to the left. The event was over.

Many cryptozoologists might simply ignore and wipe their hands of such an outrageously controversial tale. But, I don’t consider myself to be a cryptozoologist in the way in which the term is intended. Rather, I would describe myself as a Fortean who happens to have a very deep interest in cryptozoology. The difference might sound slight to some, but I assure you it most certainly is not.

Rogue stories like that of Donnie and Lynne are as problematic as they are fascinating. And I don’t mean that disrespectfully to the pair. If the event happened as Donnie and Lynne reported it – and, I have to say, there was nothing odd or prankster-like about them – then Bigfoot is a creature even stranger than I generally consider it, which is as something with distinct and decidedly paranormal overtones.

But, there’s weird and then there’s beyond weird. This case clearly falls into the second category. Unfortunately, when faced with with these “beyond weird” cases it only makes it more and more difficult to fathom what’s really afoot.

That doesn’t make me want to give up the chase, however. In fact, the exact opposite: it encourages me to push further for the answers – but which might not be the answers we’re expecting. So, with that in mind, I say to fellow researchers of the unexplained (in all its many and varied forms) don’t ignore those cases that are difficult (or near-impossible) to fathom. Instead, embrace them. They may be seriously strange, but they may also be the ones that crack the puzzle.